Vintage Levi's 501 Red Line Jeans produced from the early 1970's through 1986 seem especially interesting to collectors, but Levi's  from before 1970 generate a lot of interest and impressive auction values on Ebay. Vintage Redline Jeans on Ebay

The "Red Line" is the red stitching on the inside of the the legs on the jeans going through the selvedge.


Selvedge is the woven edge of the material that was used to prevent unraveling. They have also been called "Red ears," which is derived from the Japanese word akaimimis. 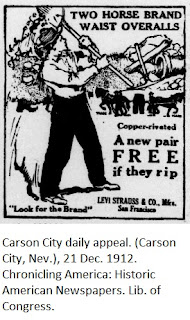 Blue jeans were called "Waist Overalls" before 1960. Waist Overalls with copper rivets were designated with 501 since 1890. In 1927 LS & Co began using a 10 oz. red selvedge denim made exclusively for them by Cone Mills.

Before WWII jeans were called "Waist Overalls" and were more associated with work. After WWII they began to be viewed as leisure clothing. The American public began using the term "Jeans" instead of Waist Overalls during this time. In 1960 Levi Strauss & Co. started using "jeans" in their advertising.